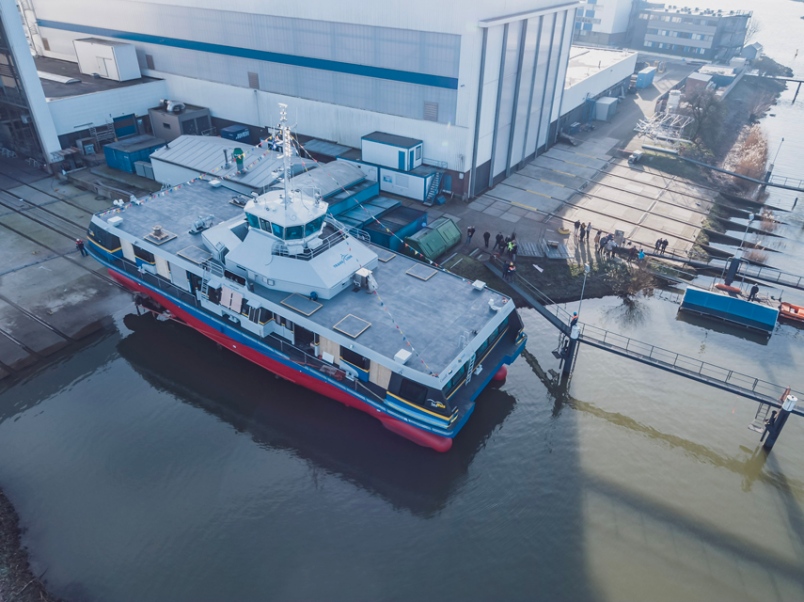 The Burrard Chinook launches at Damen Shipyards in the Netherlands. photo supplied

The latest SeaBus in TransLink’s fleet is making its debut.

The transit authority has christened the Burrard Chinook, in honour of the “largest and most iconic of the Pacific salmon species.”

“The Chinook salmon has played a central role in life on the west coast of British Columbia for generations. It is also a renowned swimmer and a critical part of the ecosystem in the Burrard Inlet and the northern Pacific Ocean,” a release from TransLink stated Thursday.

The Chinook is due to start making the cross-inlet trip this summer when TransLink will begin offering sailings every 10 minutes during rush hours.

“The addition of the Burrard Chinook to our iconic SeaBus fleet is a key part of the Metro Vancouver Mayors’ Council 10-year vision to improve transit service and decrease travel times in congested corridors like those on the North Shore,” TransLink CEO Kevin Desmond said in the release.

The Chinook name will be emblazoned on the side of the ship, along with translations into the Squamish language and into hən̓q̓əmin̓əm̓, which is spoken by the Tsleil-Waututh and Musqueam people.

TransLink specified a number of criteria the new name had to meet, including: maintaining consistency with the marine life theme (It jones the MV Burrard Beaver, MV Burrard Pacific Breeze and MV Burrard Otter II); It had to be easy to say and understand over radio transmission and it had to be a suitable length for display on the SeaBus as well as emergency equipment and life jackets. It also had to meet Transport Canada’s regulations for marine vessel names.

“When it goes into service as part of TransLink’s extensive network, the Burrard Chinook will be a key part of helping people get to where they need to go safely and efficiently,” said North Vancouver-Lonsdale MLA and parliamentary secretary for TransLink Bowinn Ma.

The Chinook was built by Damen Shipyards Group, a Dutch firm that built the Otter II.

The federal government put up 50 per cent of the $32.2-million cost. The province covered one-third and TransLink the remaining 17 per cent. The vessel is due for shipment across the Atlantic in the coming weeks, according to TransLink.

“The Burrard Chinook represents another realization of the investments made across Metro Vancouver to improve how we get to work, home or play. Tackling congestion is a core focus of mayors’ council and for communities on the North Shore. I look forward to continuing to work with my colleagues from all levels of government to make investments in our transit and transportation networks to help residents move throughout our region,” she said.